What attracted settlers two hundred years ago to Aiken, is still the same today.

The great explorer Hernando DeSoto arrived in Aiken in 1539 in search of silver. The local Indians, the Cofachiqui welcomed DeSoto and his men, but when the newcomers found no silver, they took their frustrations out on the natives, robbing them and their burial grounds. As Indian graves were opened, DeSoto found the remains of his brother, Ayllon. Furious, he kidnapped Queen Cacique and fled with 14 bushels of freshwater pearls.

By 1685 with the arrival of English Colonists, Aiken and the surrounding towns had become important Indian trade centers. Furs were exchanged for European goods which were shipped up the Westobou River (later renamed Savannah River) from Charleston. Indian nations in Georgia, Alabama, Mississippi, Tennessee, and North Carolina carved trails leading to this post. In 1716, Fort Moore was erected providing protection for the western entrance of South Carolina and the Indian Trade business.

In 1832, the world’s longest steam engine railway was completed. It spanned 136 miles, from Hamburg (North Augusta) to Charleston, following the same trading paths as the Creek/Chickasaw Indians. It became the “Best Friend” because of its usefulness in the exploration of cotton, flour, and tobacco. With its rich farmland and favorable climate, the area grew rapidly and soon became a major trade link in the South.

Aiken became a summer retreat for Charlestonians escaping the threat of malaria. Then early in the 20th century, newly wealthy families from the Northern US and Canada began to discover the charm and ease of life in Aiken County. They came to escape northern winters but soon began to colonize the area as a leisure destination.

The healing combination of warm dry air and pure, clean spring water earned Aiken a reputation as a grand health resort. Word spread among wealthy Northerners who were lured to the area by the opportunities for equestrian sports thus establishing Aiken’s celebrated “Winter Colony.” Among them was Thomas Hitchcock who with the Whitneys established the tract of land known as Hitchcock Woods for public use. 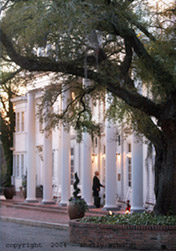 The restorations experienced in houses and churches reflect the wealth and sophistication of the population during the Winter Colony era and illustrate the impact of the Winter Colony on the community. Hayne Avenue, Colleton Avenue, South Boundary, and Whiskey Road are old, fashionable residential avenues which attracted both local residents and winter visitors to build beautiful homes. Historic downtown Aiken continues to serve as a vibrant hub for the community and provides a unique identity and charm for the area.